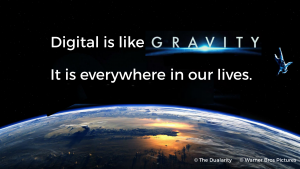 I was talking with my best friend, explaining my enthusiasm for technology. He doesn’t like technology very much in general; he’s probably afraid of it and has some nostalgia for the past. After an animated discussion, I said to him, ‘You can argue. You can agree or disagree, but you will not stop it. You can say you don’t believe in it. You can fight it. It doesn’t matter whether you believe in technology, it will act on you and your life, just like gravity.’

Today, digital is already like gravity. It is everywhere in our lives from renting a car to going on holiday, doing grocery shopping, streaming movies, at retirement homes, reporting taxes, when doing sports. Even non-believers, those who don’t want to use technology or don’t think technology can help them, are likely to end up coming to the middle, coming closer to the believers. The believers will need to meet them on middle ground and lead them. The future reality will find its balance somewhere in the middle, but even that will go far beyond today’s imagination. The believers and non-believers are a Dualarity, without one we cannot have the other. The middle point is where we have balance. If we want to remove the fear, we need to create trust. Can we trust technology? How do we make sure that there’s trust? Trust will probably be the single most important challenge as we move ahead, for both believers and non-believers. And we know that humans tend to overestimate the speed of changes but underestimate the impact of the changes.

Valerie Beaulieu, GM Small & Medium Business Microsoft Asia, shared the following with me: The person who influenced me a lot relative to technology adoption was my grandfather. He told me that when he was a boy, people were dreading the development of a power plant on the river nearby, fearing flood, fires, etc. Who today would fear electricity? It’s definitely part of our lives.

Innovation and technology are evolving on an exponential curve, with predictions that the growth will continue and in a few decades the power of all computers will exceed that of human brains. This point, where computing power exceeds human power and starts developing its own intelligence, where it’s possible to build a machine that is more intelligent than humans, is the technological singularity. The predicted dates for the singularity are mostly around 2045.

Whether we like it or not, the future is coming. We can waste a lot of energy fighting it or we can put our energy into helping our next society and industry to thrive. The future is our new home, so let’s be inspired by it while we learn fast from our mistakes, set some rules to maximise what is coming and minimise the nasty side-effects. Politics and government will play a role, but this is probably already bigger than them.

Understanding what is happening by seeing, sensing and looking around us is a critical step.

Many of the things we do, at work or at home, are about making our lives easier. Save me time! Save me money! Make everything easier! Creating beautiful things and producing art are ways to express ourselves, enhancing a personal balance, improving business and personal health. Everybody seeks to have this ease, balance beyond their primary needs as a human being.

Nigel Kershaw, Big Issue Executive Chairman, says, ˜Tech puts power into people’s hands and has the potential to change both attitudes and lives.’

The impact on society of the changes we are seeing now will be much bigger than the impact on industry. We tend to underestimate the impact digital will have on the way we live, where we live and with whom we live.

So what is happening around the world?

Lets take a look at the worldwide population. Today there are 7.2 billion people on this planet, the urbanised area is around 50%, and around 3.4 billion of those people are active internet users. There are 2 billion active social media accounts, 3.6 billion unique mobile users. Hundreds of millions of people are using their mobile phone to call and make micro payments, even though they don’t have a smartphone. They don’t have the internet. In Africa, countries like Kenya are leading the way in using mobile phones to make payments.

If we look at the internet penetration around the world, it’s diverse: in North America it is around 90%, Western Europe around 80%, but in the Middle East, only 35% have internet, with just 26% in Africa. So Western Europe and North America are leading the way with internet penetration, while more than 4 billion people have no access to internet today. There are a lot of initiatives taking place to enhance the accessibility for the rest of the world, but around 1.2 billion people don’t even have electricity.

Elon Musk, with Space X, is sending four thousand satellites up in the next five years. Alphabet Inc. (Google) has Project Loon, using hundreds of helium balloons that will be closer to the earth, meaning better reception. 93 Richard Branson, Coca Cola and Qualcomm have combined their efforts in the OneWeb satellite initiative planned for 2019, and the O3b Networks have twelve satellites. Experts are predicting that 90% of the entire population will be connected to the internet within ten years.

Microsoft and Facebook have agreed to build a 6,600km subsea cable jointly, called Marea, 94 designed to carry 160 terabytes of data per second (1 terabyte = 1000 gigabytes) across the Atlantic Ocean to meet the growing demand for high-speed Cloud, bandwidth and online services. It is expected to be completed by the end of 2017 and will connect the United States with southern Europe. The move comes nearly two years after Alphabet Inc. agreed with five Asian companies to invest about $ 300 million to develop and operate a trans-Pacific cable network connecting the United States to Japan. Google either has or plans to invest in five undersea cables, Microsoft four, Facebook two and Amazon one.

If we look at a typical internet minute, 60 seconds, around the world: 3.5 million Google searches are performed, 4.1 million videos are viewed, 156 million emails sent, 114,000 Skype calls are made, 900,000 Facebook logins and 46,200 Instagram images are posted. Just imagine the data that this represents. The abundance is unbelievable. Big data is here, and the data produced by businesses is doubling every 1.2 years. And check the evolution between 2016 en 2017.

If we look to 2020, we’ll go from 6.4 billion devices to 50 billion connected devices because of the invisible industrial revolution. The amount of data that these will produce will be massive. We will go from 2.6 billion smartphones to 6.1 billion smartphones. We’ll probably have around 250,000 IoT enabled driverless cars in production. We’ll have more than 10 million items of smart clothing. Digital will represent 25% of the worldwide economy, and will become an $ 11 trillion business by 2025.

Leaving the problem to the next generation, waiting for the millennials to come along to fix your technology imbalance (assuming that by 2025 50% of the working population will be millennials) will not be a good solution. It’s not about which generational group, X, Y or Z, that you belong to determining your mindset; it’s about infusing the right mindset and not waiting for it to appear.

We need to act now. We owe it to our kids, ourselves, our society and our businesses.

As international Public Speaker, Trend Sensemaker, Executive Whisperer and Author, I help businesses to take the pain out of their personal and business transformation, leaving them with a regained sense of spark.