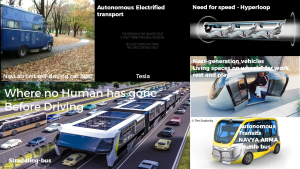 In 2016, Google crossed the 2 million mile mark with its selfdriving car prototypes; Tesla customers have driven 230 million miles with autopilot active and released functionality in its cars through software updates; Uber is testing self-driving cars in Pennsylvania; major car manufacturers are announcing their plans for robocars. And, just as the robots will, these self-driving cars will learn from each other about the landscape of our roads and the bad habits of humans. The driverless car story is not only about the car itself, but about the whole ecosystem surrounding the car, from connected cars talking to each other, road infrastructure with adjusting lights, insurance policies changing to the notion of autopilot, taxis without drivers and renewable energy to cars able to resist a biological war. Tesla, founded by Elon Musk, launched the Model X with a bioweapon defence button that turns the car into a safe haven in the event of a biological attack.

Tesla is leading the way AND delivering today. Tesla Motors is named after the electrical engineer, physicist and civil inventor Nicola Tesla, who received on 8 November 1998 a US patent for a remote-control for unmanned vehicles referred to as ‘tele automation’. The demand for affordable and ecologically sound cars is so high that in the five weeks after Tesla revealed the $35,000 Model 3 early 2016, more than 400,000 people paid $1,000 to reserve one. Tesla promised to start deliveries by the end of 2017, and to have 500,000 units a year in production by 2020, generating an astonishing pre-funding of half a billion dollars for a car that is still to be built. Of course the aim of Elon Musk is not only to disrupt the automarket but to lead the new world of a reusable battery powered society at home, on the road and at work, solving some of the biggest global problems around energy. Nikola Motor, a new Salt Lake City-based startup, claims it has received over 7,000 pre-orders worth over $2.3 billion for its electric truck, even though an actual prototype will only be unveiled at an event in December 2016. The appetite is huge.

Check-out the first self-driving car with people riding on board by Navlab in 1986.

And compare this to today’s self-driving car Tesla.

Advances in car technology by 2020 will include fully autonomous cars – Mercedes Benz has a design that has four seats facing each other; biometric car keys; your car becoming a doctor – Ford Motor Company is testing seat belt and steering wheel sensors that can track vital statistics; and cars that are self-repairing – Audi is testing new nanotechnology material to enable self-repairing plastic. Another example is China’s futuristic straddling bus (see picture) that would span two traffic lanes and carry up to 1,400 passengers.

We can see a lot of benefits of driverless cars such as less traffic, deaths and injuries, fuel usage decrease, enhanced safety, more free time, better health, reduced emissions, change in the way we live in cities, increased demand for new types of jobs, new types of insurance premiums and a better transportation service.

As always, innovations like driverless cars could have some interesting sociological side-effects.

‘I am predicting that, once computers are doing the driving, there will be a lot more sex in cars,’ said Barrie Kirk of the Canadian Automated Vehicles Centre of Excellence.

Or what about the idea of dating cars, where connected cars driving close by would help you get a date? As you get close to someone who fits the profile you like – assuming you are open to dating – the cars would communicate asking if you would like to stop near the next exit. There is for sure no limitation to our human imagination.

Will future drivers even need a driver’s licence? What about drivers who love to drive? And who loved the sound of the car?

Have a look at this ethical and moral test on what machines should do when for example a driverless car is confronted with car failure. They want to learn. http://moralmachine.mit.edu/

So the future will reimagine car and mobile experiences, seeing car manufacturers, like Tesla, Volvo and BMW, take advantage oft he innovation coming from some of the biggest tech companies, like Google and Apple, coupled with new business models, like Uber and Didi. It will need the support of governments to make it all work as a connected ecosystem. Germany wants by 2030 only to have electric cars, and Norway, the Netherlands and India are following that aspiration for the future.

The renewable and storage energy industry is changing rapidly, driven by energy storage leaders, like Tesla’s Powerwall and Powerpack in the US, the German market leader Sonnen and Japan’s Panasonic Smart Towns, 99 currently delivering solutions and starting to scale. On 15 May 2016 Germany was able to see, for the first time, 99% of its energy needs supplied with renewable energy such as sun, wind, biomass and hydroenergy.

The transportation sector, defined as the connected traveller, autonomous driving and the digital ecosystem surrounding the automotive industry, will suffer the most from the technological revolution. We have the impact of Uber, the American multinational online transportation network company, on the whole taxi business and on the notion of transporting something. In 2016 Uber was present in more than 300 cities in sixty countries, providing more than 1 million rides a day, adding 50,000 new drivers a month and creating 150,000 jobs. Uber is now testing self-driving cars in collaboration with Ford Fusion in Pennsylvania, the goal being to reduce costs by eliminating the driver and increase safety on the road (90% of car accidents are due to human error). Uber has had a vast impact on all industries as it has shown, like Netflix, Airbnb and Apple TV, that one platform can change a whole industry, and it’s displacing other traditional business models as it launches UberEAT, UberPOOL and Uber Lease. Governments and the traditional transport sector are reacting by trying to ban Uber where they can, mostly without success, or by filing more than 180 lawsuits.

It’s all becoming a question of balance, changing paradigms, human business and the power of transformation.

As international Public Speaker, Trend Sensemaker, Executive Whisperer and Author, I help businesses to take the pain out of their personal and business transformation, leaving them with a regained sense of spark.