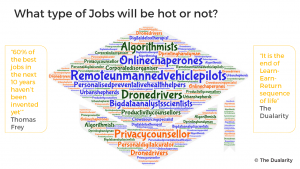 Every great work of art has two faces, one toward its own time and one toward the future, toward eternity. Lester Bangs, The Smart Automated World Creating Challenges and Opportunities

The Black Swan theory, popularised by Nassim Nicholas Taleb, is a metaphor that describes a surprise event that has a major effect, and is then inappropriately rationalised after the fact with the benefit of hindsight. It is very hard to predict the future as we don’t know what we don’t know. Future thinking is about thinking ahead: thinking about what we can see today, so we can make the world a better place and take the right actions to steer it in the right direction. A future that is worth wanting.

Moving forward towards an intelligent, more automated workforce will not just replace jobs but will transform jobs as we know them today. Parts of the job will get automated, jobs will disappear and new jobs will see the light of day. This is nothing new as innovations and automation of the workforce have been taking place during the past few industrial revolutions in the 19th and 20th centuries. Many manufacturing jobs have been replaced by automation, and so many more jobs will change as computers become more intelligent. We call them robots, our children and grandchildren might call them colleagues.

What type of jobs will be hot or not?

The well-known sociologist Manuel Castells divided jobs into generic routine jobs, such as receptionists, accountants, administrators, which are at high risk, and self-programmable jobs requiring cognitive tasks like creativity and emotional intelligence, such as therapists and teachers, which are at a lower risk. Everyone will require life-long learning to cope with the changes inherent in the digital revolution. McKinsey’s report of November 2015 added a view that only some parts of jobs might get automated, making jobs more appealing and meaningful.

Researchers at Oxford University compiled a study that looked at nine variables for more than 700 job descriptions, predicting how likely it is that a computer could take over the job. 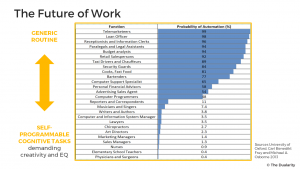 A 2016 Australian report from the Commonwealth Scientific and Industrial Research Organization, CSIRO, looked at the workplace megatrends for Australia over the next twenty years.

By 2035 we will see the birth of newly created human-only driven jobs such as (see main visual):

Futurist Thomas Frey predicts,‘ 60% of the best jobs in the next 10 years haven’t been invented yet’.

In the short term, more people will want flexi-jobs and to work in flexible co-working spaces spread around the country so they can avoid traffic, solving some of the mobility issues. They will become islands of creativity, people meeting at different locations to work. These business nomads will only need the internet, a laptop, a coffee and a cosy healthy environment to be creative. The tribal workforce gets the flexibility of work and the employer is spreading the start-up mentality, keeping and attracting the younger generations.