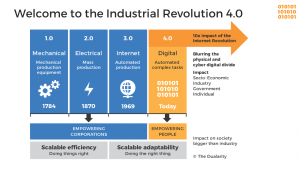 When we see the changes that are taking place, we can see we are on the verge of the Industrial Revolution 4.0. There has been a lot of debate about whether it is a fourth revolution or an extension of the third revolution, but most agree by now that we have entered a new one; that it is the digital revolution bridging the human with the cyber world.

If we look at the image, we see three major industrial revolutions that have taken place through history. The Industrial Revolution 1.0 was the mechanical revolution, centred around production of equipment powered and driven by water and steam. We had the first mechanical looms introduced in 1784. The Second Industrial Revolution occurred in 1870, the phase of the electrical revolution. Mass production was enabled by division of labour and the use of electrical energy. The first assembly line, the Ford line, was probably the most famous example, but perhaps less well-known are the Cincinnati slaughterhouse lines. These first revolutions were only scalable by adding bodies – they relied on humans to achieve more. They were scale-efficient by doing things right. The Third Industrial Revolution occurred in 1969, with the advent of micro-controllers and IT automating manufacturing, and when the internet was launched. The internet came from the military, from ARPANET, and was designed to keep military communications going when the phone system was down. This was then further developed by two computer scientists, the Belgian, Robert Cailliau, and a Brit, Tim Berners-Lee, into what we know today as the World Wide Web. This revolution was scalable: add more computers, IT systems and technology, and improve scalability. By doing the right thing we could achieve economies of scale.

The Fourth Industrial Revolution is distinguishable from the third because it is where humans meet the cyber world; where technology and people are not distinct, not separate. We had the PC and we had a life – today our devices and sensors will become an extension of us. Facebook is an extension of us. Our phones are extensions of us. Our smart watches are extensions of who we are and what we do. This fourth revolution has the same triggers as the third revolution, but it’s cyber meets human this time. It’s the same in businesses. Everything gets integrated, customised and smart-automated. The Industrial Revolution 4.0 automates complex tasks; it’s the age of the Internet Of Things and Cloud computing.

Where the first three revolutions were mainly about empowering organisations, almost all innovation in the last few years has been driven by the consumer and is now changing organisations from the inside. When we look at the changes that are taking place, the next revolution will be in an invisible world. So far the three main revolutions have all been very visible. We could see the tablets, the iPhones, the wearables – they were visible, but increases in our capabilities are powered by technology that moves further out of sight, becomes invisible. Innovation will come from the shift to the Cloud – invisible processing power, storage, intelligence. More innovation will come from what’s happening inside and around the device versus the object we can see – artificial intelligence, powerful algorithms, Cloud computing.

An ecosystem of computing will surround us, becoming so natural it will disappear into the background. Less intrusive, it will fit into more parts of our world and solve more problems. User interfaces will become integrated and we will control them with voice, gaze, gesture. We will see the results, not the effort.

It is time to understand it – and not as a curiosity or an entry in the annals of technology or business but as an integral part of our humanity, as the latest and most powerful extension and expression of the project of being human. Virginia Heffernan, Magic and Loss: The Internet as Art

Virginia Heffernan believes that the internet is a great masterpiece of human civilisation rivalling the pyramids, agriculture or monotheism. Possibly not everyone would agree. There are at least three differences between Industrial Revolution 4.0 and the previous ones:

We will have an empowered ecosystem of consumers and enterprises that are the Dualarity. Four evolutions, driven by the physical, digital, and biological worlds, will have an impact on our economy, business, government, society and the individual, with distinct opportunities and challenges.

We stand on the brink of a technological revolution that will fundamentally alter the way we live, work, and relate to one another. In its scale, scope, and complexity, the transformation will be unlike anything humankind has experienced before.       Klaus Schwab, President of the World Economic Forum, The Fourth Industrial Revolution

Our current model and the new model are not fluently integrating with each other, and yes, there will be casualties along the way – those who are being disrupted by the dynamics of the new world and those who lack the ability to adapt and adjust – a Dualarity.

Some researchers say that the comprehensive nature and scale of the cataclysm of physical, digital and biological world changes coming together will be transformational. The majority of the government ecosystem is built upon models with mostly national rules, national taxes, local hiring and salary taxes to pay social security. The Industrial Revolution 4.0 is disrupting this model and the notion of being national is getting a different meaning. Of course, ethical questions, similar to the debates around the use of atomic energy and genetic research, will need to be answered as this connected super-intelligent world evolves, and new playing rules will need to reflect those questions.

The best technologies are the ones that you stop noticing. Chris Thorn, British Heart Foundation

New Samsung fridges provide us with the capability to scan the barcodes of products as we place them in the fridge and when we take them out. The fridge will then recommend items for ordering and can do it online for us, if we want. There are screens we can place on the wall or windows that we can project on to. Everything will become integrated into the environment; there will be natural ways of controlling things through voice, gesture, emotion, touches, and they will anticipate our needs and enhance our lives.

Our lives will follow us as we walk through the walls.