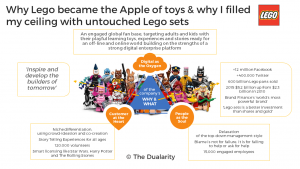 Setting the scene. Jørgen Vig Knudstorp was appointed as CEO to The LEGO Group in 2004. He discovered that a real business transformation was needed for the seventy-six-year-old family owned Danish toymaker to put a halt on declining revenue and increased debt, losing over $400 million on sales of $1 billion between 2003-2004. LEGO had an overdiversified offering lacking creativity and adding too much complexity for their users. He said, ‘There’s no single answer to anything any more.’

What happened? A real multi-level transformation strategy working on multiple fronts. Lego started by answering the questions: why do we exist? What is our purpose?

‘Inspire and develop the builders of tomorrow’

Then it looked at its people and culture, changing the culture by increasing transparency with a looser structure. It created an attitude of ‘blame is not for failure; it is for failing to help or ask for help’, allowing failure to be part of success.

Of course, the customer experience was the center of the solution. LEGO created a strategy of niche differentiation, using crowd-ideation and co-creation to leverage the massive Lego community of more than 120,000 volunteer designers. It innovated by building customer experiences for all ages, made accessible through amazing content like the successful Lego Movies, video games, apps, Legolands and colourful Lego stores around the world. The first movie generated a half a billion dollars of revenue costing less than $60 million. It signed some very smart licensing deals for Star Wars, Batman, The Avengers and Harry Potter, seeing the importance of storytelling experiences through its offering while giving fans a great customer experiences. In the past few months LEGO even released a set based on The Rolling Stones and The Beatles Yellow Submarine to address consumers of all ages.

LEGO’s social media strategy is refined for each platform and they want to be present where it matters crossing different timezones and audiences. They have passed the bar of 12 million Facebook fans, have 400,000 Twitter followers and are present on the more visual networks like Instagram to stay relevant for the younger audience. They have an engaged, connected and informed communities.

Jørgen Vig Knudstorp and his team have been able to see and leverage what is available around them to create an engaged global fan base and members, targeting adults and kids with their playful learning toys, experiences and stories ready for an off-line and online digital world, attracting the digital savvy customers. The became a successful digital company building on the strengths of a strong enterprise digital platform.

Outcomes. For the past years, the demand for construction toys, especially Lego’s blocks, has been growing at the expense of other toy manufacturers like Mattel Inc. and Hasbro Inc. As of July 2015 more than 600 billion Lego parts had been produced. In 2015 LEGO earned $5.2 billion (2016 numbers not yet available) coming from $2.3 billion in 2010 and employs close to 15,000 people. In February 2015, Lego replaced Ferrari as Brand Finance’s ‘world’s most powerful brand’.

Jørgen Vig Knudstorp, after being their CEO for more than 12 years, is stepping down to lead the newly created LEGO brand group as they seek to expand overseas and will become chairman of Lego’s board in May 2017.

LEGO transformed from being an injured business to a Dualarity healthy and mature hero able to perform while transforming. And this by putting the customer at the heart, see people as the soul and drive digital as its oxygen.

The world loves LEGO and many of us have been touched by LEGO at some point in our lives. They have created an emotional connection. They became the Apple of the toys.

The Telegraph article ‘Lego is a better investment than shares and gold’ states the average LEGO SET has increased in value 12 per cent each year since the turn of the Millennium’. As a result I bought multiple Lego sets that are now kept untouched in my ceiling to be sold in 10 to 15 years from now. And if that doesn’t work out, I’ll give the sets to my grandchildren.

And they announced their new Lego headquarters re-design in Denmark.

As international Public Speaker, Trend Sensemaker, Executive Whisperer and Author I help businesses to take the pain out of their personal and business transformation, leaving them with a regained sense of spark.