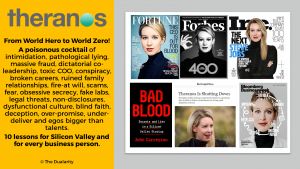 ‘Bad Blood’, by far my preferred book of 2018 and probably of the last few years!

As a X-mass gift to my son I ordered the book ‘Bad Blood: Secrets and Lies in a Silicon Valley Startup’ from John Carreyrou, a two-time Prize-winning investigative reporter of the Wall Street Journal. A book describing the rise, the hype and fall of the blood-testing startup Theranos, its CEO/founder Elizabeth Holmes and COO/boyfriend Ramesh ‘Sunny’ Balwani. A true story masterly written by John Carreyrou.

As my son already started another book I ended up reading it first. What a roller-coaster, what a thriller, what an unbelievable story, what a journalism! I just couldn’t stop reading and couldn’t believe reading the details of a story I knew was a true business story. Even if you would try to invent it, you would fall short of this reality.

Theranos was a unicorn (valuation >$1B) promising to disrupt the medical industry and revolutionize the laboratory testing world by producing multiple fast blood-testings just with a drop of blood. It was founded by Elizabeth Holmes in 2003 after leaving Stanford university as a 19-year-old. In 2015, Forbes named her the youngest and richest female entrepreneur billionaire with a $9B valuation but after revelations of fraud the same Forbes published her net worth to be zero dollars. Fortune named Holmes one of the “World’s Most Disappointing Leaders“. Theranos burned $900M investment money and 800 employees lost their job. Many are still in complete disillusionment.

The company had faked test results, hidden malfunctioning technology, played with people and manipulated their financial numbers. They were trying to run the company as a software company while being a healthcare company impacting people’s health. ‘Trial and error of people was not ok’, Maureen Glunz.

Why should you read it?

It is a must read for every entrepreneur, dreamer, venture capitalist, politician, business leader and board member. It is a tale from world hero to world zero.

It falsely claimed to have revolutionary blood test technology using very small amounts of blood. Too good to be true. It misled investors, politicians, business partners, doctors, patients and the whole medical industry. This took place in one of the most regulated industries, namely medical and healthcare.

What lessons did I learn from reading it?

Theranos was shut down in September 2018 and both Balwani (COO) and Holmes (CEO) face a maximum of 20 years prison, multiple fines and new court cases.

The story is so unimaginable on all fronts that a movie with actress Jennifer Lawrence is going to see the light in 2019. You can start the new year by reading the book!

A true lesson for Silicon Valley and for every business person.